The 7’1” Frenchman has become one of the premier big men of the NBA. Originally drafted in the first round of the 2013 NBA Draft by the Denver Nuggets, Rudy Gobert was part of a draft night deal that sent him to the Utah Jazz. Since his rookie season, Gobert has improved each and every year. He made the All-NBA Second Team in 2017 and the All-NBA Third Team in 2019. This past February, Gobert earned his first All-Star invite. He is a 3x NBA All-Defensive First Team award winner, and has once led the league in blocks in 2017.This yellow Utah Jazz Statement Edition jersey was worn by Gobert on February 21st, 2020 during a home game vs. the San Antonio Spurs. Gobert logged 38 minutes that night, notching a double-double with 18 points and 14 rebounds. The bright yellow jersey features the Jazz’s alternate ”J” logo sewn across the chest in purple twill with Gobert’s #27 is sewn on directly beneath the left part of chest in green twill. The NBA logo is applied to the back of the jersey above Gobert’s last name stitched on in purple. ”27” is sewn on to the back of the jersey beneath the last name in green twill. The sides of the jersey are accented with a green panel. A Nike swoosh is applied to the right chest, and a ”5 For The Fight” advertisement patch are applied to the left chest of the jersey. A black memorial band is sewn above this patch in honor of the late former NBA commissioner David Stern. An NBA Authentics tag and a Nike size ”54” tag with a ”Length +4” flag is sewn on the front left tail.Fanatics Authenticated 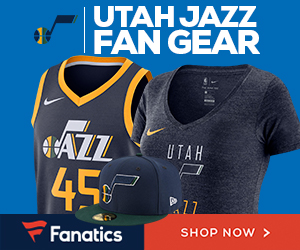